Below is a glossary of terms to help you understand the building blocks and elements that support good digestive health and a balanced immune system, fundamentals for the health of your horse.

An antigen is any structural substance (i.e. bacteria, viruses, toxins, etc.) which stimulates the immune system to produce antibodies against the antigenic structure.

Aspergillus refers to a group of mold species which play diverse roles.  While some species may cause diseases in humans and animals, other species are of vast importance medically and as commercial microbial fermentations.

B cells or B lymphocytes are a type of white blood cell involved in adaptive immunity. Many B cells mature into plasma cells and make antibodies which bind foreign antigens.

Colostrum is a form of milk, or first milk, produced by the mammary glands of mammals. Colostrum is packed with nutritional components such as immunoglobulins and growth factors which function to provide passive immunity and gut health.

Coronaviruses are common group of viruses which infect both humans and animals, causing respiratory or enteric illnesses. Most coronaviruses however, generally infect one animal species or a small number of closely related species. Equine coronavirus (ECoV) for example, is specific to the horse and causes lethargy, decreased appetite and fever. Other signs may include colic and diarrhea.

Cryptosporidium is a microscopic parasite that causes diarrheal disease crytosporidiosis, commonly known as “Crypto.” This parasite can be spread in several different ways, but water is the most common method of transmission.

Dendritic cells are antigen- presenting cells. Their main function is to process antigen material and present it on the cell surface to the T cells of the immune system. They act as messengers between the innate and the adaptive immune systems.

Escherichia coli are a diverse group of gram negative bacteria which normally reside within the intestines of healthy people and animals. However, while most types of E. coli are harmless, others are known pathogens and may cause serious infections

Eosinophils are white blood cells responsible for combating multicellular parasites and certain infections in vertebrates and controlling mechanisms associated with allergy and asthma.

An immunoglobulin found in colostrum whose primary role is as first line of defense, protects mucosal surfaces and prevents the attachment of pathogens to them.

IgY is found in high concentration sin chicken egg yolk and is a class of proteins formed by the immune system in reaction to certain foreign substance and specifically recognize them.

A lacteal lymph vessel is a type of capillary which absorbs fat in villi of the small intestine.

M cells are specialized cells found in intestinal epithelium covering what is referred to as a Peyer’s patch. M cells transport antigens (i.e. beta glucan) from the lumen to cells of the immune system. Soluble macromolecules, small particles, even entire organisms

MBG Peptides are the intermediates and products of metabolism. The term MBG Peptide is usually restricted to small molecules. MBG Peptides have various functions including; fuel, structure, signaling, stimulatory and inhibitory effects on enzymes, catalytic activity of their own defense, and interactions with other organisms.

The term mucous membrane refers to endodermal linings which are covered by epithelium and are involved in nutrient absorption.

Mucus is the slippery secretion produced by, and covering, mucous membranes.

Beta Glucan is a polysaccharide polymer derived from the cell wall of mushrooms. Research has shown that beta glucan effectively strengthens the immune system by activating white blood cells to support a healthy and robust immune response without over-stimulating it. Mushroom Beta Glucan  enhances the immune response by activating macrophages, our body’s frontline of defense. Macrophages seek out and destroy pathogens and foreign debris through phagocytic activity and trigger a cascade of immune events to occur, including the activation of B-cells, T-cells and natural killer cells.

Mycotoxins are toxins produced by some species of fungi which are capable of causing disease.

The term Peyer’s Patch refers to regions of lymphoid tissue are found in the ileum region of the small intestine. Their function is to defend against infections in the intestines where large numbers of pathogenic microbes are found. Peyer’s patches establish their importance in the immune surveillance of the intestinal lumen and in facilitating the generation of the immune response within the mucosa.

Are the beneficial bacterial inhabitants of our digestive tract. The term “probiotic” was coined to describe the deliberate ingestion of health promoting microorganisms.

PRP’s are short chains of amino-acids which contain a high proportion of the amino acid proline. PRP’s are signaling molecules that have the unique ability to modulate the immune system, turning it up when needed to fight an infection, or turning it down in the case of over activity i.e. in autoimmune disorders.

Rotavirus is a contagious virus that can cause gastroenteritis (inflammation of the stomach and intestines). Rotavirus is a major cause of infectious diarrhea in foals.

Salmonella are a group of bacteria that can contaminate feed supplies and cause salmonellosis, one of the most commonly diagnosed infectious causes of diarrhea in adult horses.

T cells or T lymphocytes are a highly specialized type of white blood cell essential to the adaptive immune system. T cells are like soldiers whose mission is to seek out targeted invaders and destroy them. 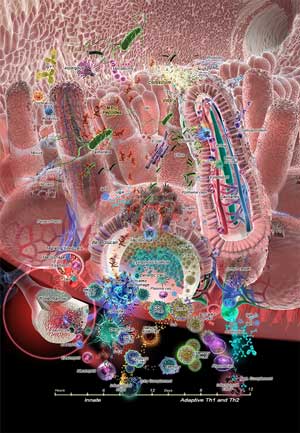